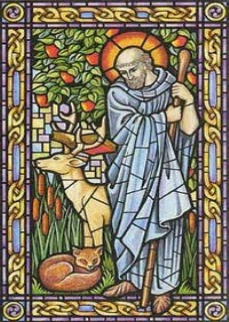 St Ciaran of Ireland (516 AD – 544AD) was converted to the Christian faith by St Patrick and began to preach to the Irish people, who were then mostly pagans. One day, feeling the need for a period of quiet, Ciaran went to a lonely woodland district and started to build himself a cell. Sitting down by a tree, he noticed a fierce looking boar. Ciaran spoke gently to the boar calling him ‘Brother Boar’, as he treated all animals as his brother and sister. The boar realised that Ciaran was a friend and not a foe and so he helped Ciaran to build his cell, tearing down strong branches with his teeth and bringing them to Ciaran. When the cell was finished the boar stayed with Ciaran and soon many other animals joined them, including a wolf, a fox, a badger, a deer and many birds. Ciaran called them all the first brother monks of his little monastery. Later, as people joined them and Ciaran started a larger monastery, he never forgot his animal friends who continued to live with him.